I’m very careful about recommending a gun to someone else. I can tell you if a choice is a bad one for you, based on my experience training a lot of shooters, but among the many good choices, I can’t pick a gun for you. It’s just too personal. I spend a lot of time reading. I read every issue of the fifteen or more gun magazines that are available here in the U.S. I read the letters to the editor first, then the gun reviews, followed by the training articles. I often find the gun reviews amusing as well as informative. That’s because every gun writer has his or her prejudices and these color how they review a gun. Some love 3-dot sights, others hate them. Some like big thumb safeties on 1911s, others like little bitty ones. What’s funny about it is they often write as if their particular preferences are the ones everyone should have. But in all fairness, many mention them as just that — personal preferences.

Just for grins I thought I would tell you what I like in a handgun and why. There is one given I can get out of the way quickly. I want a gun that is very tolerant of a variety of ammunition and that if kept relatively clean works 100 percent of the time.  But what else? 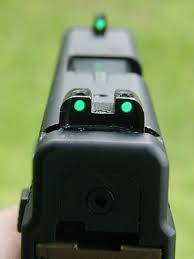 I like night sights. All of my defensive guns don’t have them, but most do. It’s not just for shooting if the light is low. I like them because if I need to locate the gun quickly when startled awake at night, or if the lights go out, the sights beckon me.

I like grips that aren’t too rough. Some of those tactical grips people put on handguns are very uncomfortable to me. A textured or checkered pattern is welcome, but don’t make it too rough because I rarely wear gloves. Tactical operators that wear shooting gloves when heading for a fight — those are the ones that like tactical grips.

For a 1911 type gun I like a checkered front strap and back strap. I’m not sure why, but they just feel better in my hand. One of my favorite guns, a Colt Commander, doesn’t have a checkered front strap, though the back strap is. I love the gun, but I find myself wishing the front strap was checkered. There is an aftermarket solution I tried for a while, but it didn’t stay in place well. I may try again with some type of adhesive.

Except for single-action handguns that are carried (at least by me) cocked and locked (hammer back, safety on) I don’t like external safeties on handguns a couple of my guns that have them, if I’m carrying the gun I leave the safety off so there won’t be an added complication should I need to draw and shoot.

On my 1911s I like a an ambidextrous safety and I like the over-sized ones. Why? For a reason that may not be applicable to many people, but I carry my defensive pistol in an inside the waistband (IWB) holster worn at the three o’clock position. With the gun in that position, the safety is against my body so it’s not really  easy for me to check, as I periodically do, to make sure the safety is still on. With a safety on the right side of the gun also, it’s very easy to check the safety to make sure the motion of my body hasn’t pushed it off.

When it comes to 1911s, I could care less about whether it has a Series 70 or Series 80 firing pin system. I cannot tell the difference when shooting the gun and both offer the safety I desire. But when it comes to guide rods, I prefer not having a full-length guide rod. Some 1911s have that, others don’t. For me the difference is simple. It’s easier to disassemble the gun for cleaning with a short guide rod than with a full-length guide rod. Does it change how the gun shoots? Nope. Does it change its reliability? Nope. A full-length guide rod, as far as I’m concerned isn’t a red flag that would keep me from buying an otherwise desirable gun, but my preference is to not have one.

Caliber – I like a .45. But sometimes I carry a 9mm. I used to carry .40 S&W from time to time, but the arthritis in my hands and shoulders makes shooting a .40 uncomfortable. Even with the .45 I’m tending towards rounds with less recoil (think ARX). I’ve covered this in so many articles before, I won’t take up any more space here.

Rails – should your gun have a rail or not?  I think that one depends on where you’re going to use the gun. I have an M&P in the bedroom with a Streamlight flashlight/laser combination, so the fact that gun has a rail makes it work. Some of my carry guns have rails and all they are good for as far as I’m concerned is making me choose a different holster. I personally will not have a light on a carry gun because I don’t intend to open carry and having a concealed carry rig big enough for a light or laser on the rail just isn’t feasible. Besides, I don’t anticipate the need in a defensive gun that I carry.

Striker-fired versus hammer-fired. For me this makes no difference, but I read a lot of handgun guys that say they don’t like the idea of a double-action first shot followed by single-action for the follow up shots. Many seem to imply this is a training problem. I guess if you just don’t shoot much it could be, but I don’t seem to have a problem adjusting quickly to whatever gun I happen to be shooting. So I have guns with hammers and I have striker-fired guns and I just shoot them without worrying about it. If a semi-automatic has a hammer, it usually has a de-cocker, and I like the fact that I can de-cock the gun and put it back in my holster. The striker-fired guns don’t have that.

How about the finish? On some guns you have the option of stainless steel versus a blued finish.  I like stainless steel. Wait, I like blued. I like polymer finishes. I like bi-tone guns. Okay, too many choices. Let me back up and pick just one. Hmmmm. I have this desert tan, Marine Colt that looks pretty nice. But I keep eyeballing the Metro Arms Chrome Commander. Then  there’s the deep blued finish on the Remington R1. See, it’s hard to choose. Mix them up and get some of each, that’s what I say!

Triggers. If there’s anything gun guys love to hate it’s a certain trigger or trigger pull. But what some folks hate, others love. Really heavy double-action trigger pulls, I don’t like, but beyond that, I just don’t seem to be as “trigger sensitive” as a lot of guys. I find the trigger on most guns pretty easy to get used to if I just shoot it a few times. When you’re picking a gun, you do need to make sure the trigger pull isn’t too hard. Anything over 12 pounds for me is just not something I want to deal with. I will say that 1911 triggers, which move straight back as you pull them and which usually have somewhere between 4 and 5.5 lbs. of “pull”, are a pleasant surprise to people who have previously only shot handguns with hinged triggers, which is what basically every other type of pistol has. 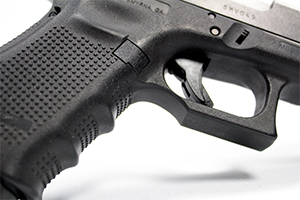 I could cover many more details that people either like or don’t like about guns, but I’ll stop with just one more. It’s something the writers usually call “undercut” and it applies to the trigger guard. The purpose is to allow you to get a higher grip on the frame which mitigates some of the recoil. I was reading about some of the new Sig Sauers the other day and the writer was talking about how they had an undercut trigger guard which was an improvement over earlier models. I started looking at my Sigs – an SP2022, a P226 and an M-11, which is really a P228 in military dress, and a couple of 1911s. All of them except the 1911s have an undercut to some degree or the other. The picture I’ve used as an undercut example here is actually on a Glock, but it’s not stock. It’s a gunsmith enhancement and you may notice, it was done by cutting a way a significant portion of the stock trigger guard. I’m for anything that mitigates recoil, so I’ll say that’s a good thing, but I’ll also tell you have guns I love to shoot that don’t have that undercut.

You will develop your own preferences over time. Maybe you have already. It’s kind of what makes selecting a firearm so personal.