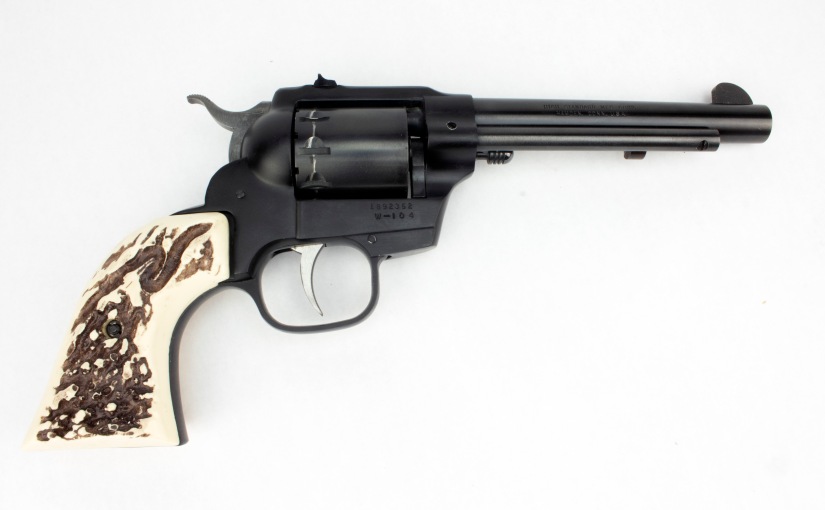 Around age 14 I began working part time jobs after school and during the summer. It didn’t take me long to start gathering the tools to be a man. Chief among them was a mildly customized F1 Ford pickup and a .22 revolver. I bought the revolver at the local Western Auto store, paying something just shy of $50 for it. The gun was a High Standard Double Nine. High Standard was known at the time for it’s semi-automatic .22 that was used in competition. There was another revolver built more along the lines of a Smith & Wesson called the Sentinel and folks said the Sentinel was every bit as good as one of the more expensive revolvers from Smith & Wesson or Ruger. The Double Nine was a cowboy version of the Sentinel. It looked like a Colt Single Action Army, but the cylinder swung out for loading, and it was a double-action revolver rather than single action. Sort of the best of both worlds.

I used my Double Nine for plinkin’ and impressing the girls I dated by taking them shooting and I occasionally used it to bag a squirrel or a rabbit. I loved that gun, but apparently not enough to keep me from trading it to a friend for a stereo. My rationing was he was a close enough friend I’d still have access to the gun when I wanted to shoot it. But a few weeks after the trade, my friend told me it was really his mother’s stereo he had traded to me and she wanted it back. Naturally, I was willing to reverse the trade, but my friend confessed he had sold the gun to somebody who didn’t want to give it back. I returned the stereo but was without my Double Nine.

I went through the rest of my youth without getting a replacement, but I missed it enough that when I got into the gun business with my friend Jerry Colliver, Jerry found me a replacement. This time it wasn’t a $50 purchase, but $300 got me a nice Double Nine still in its original box. That box has the original price sticker on it—$64.95, indicating it was originally purchased about the same time I bought my first Double Nine.

I’ve got .22 revolvers from Heritage, Ruger and Uberti, but I gravitate to the Double Nine for my own shooting enjoyment. Let the kids and grandkids enjoy the other guns, the High Standard has a special place in my shooter’s heart. It’s not better than the other guns, though it is a little easier to load and unload. I just have a lot of pleasant memories associated with the Double Nine.

My gun is a model W-104 with a 4.5″ barrel. It’s currently wearing staghorn grips, but I also have a set of black grips and a set of faux pearl grips, both made specifically for the Double Nine by Jay Scott Custom Grips. The cylinder has drag marks made by the bolt as the cylinder rotates. I’m told that’s typical of these guns. Other than those markings, which I touch up from time-to-time with Birchwood Casey Aluminum Black, the gun shows no signs of abuse or wear. The frame and cylinder are made of an aluminum alloy.

Loading the gun is very easy. Beneath the barrel there is a small tab that on single action revolvers would be connected to the rod used to push empty shell casings out of the cylinder. This tab only moves a half an inch or so and is used to release the cylinder, which opens like the cylinder on a typical double action revolver. You can load the gun with shorts, longs or long rifles, mixed and matched at your pleasure. After firing, simply open the cylinder again press the cylinder pin to eject the empty shells, or any cartridges that have not been fired.

The double action trigger pull exceeds the 12 lb. limit of my Lyman trigger pull gauge, but it works in a way I appreciate. There is no slack to speak of and the trigger starts stacking immediately. If you’re pulling it slowly, it’s easy to stop at the wall just before the break and recheck sight alignment before pulling through. If you want to simply pull the trigger without paying attention to the break, you can and it feels smooth all the way through. In fact, you can empty the gun in short order just by aggressively pulling the trigger repeatedly until the bang turns into a click.

It’s easier to be more accurate with single-action shooting, at least for me. Cocking the gun sets the trigger to the rear where an easy 4 lbs. of pressure fires the gun. The sights are better than those found on a lot of cowboy guns in that there is a notched rear sight that sets above the top strap. The front sight is a blade that is 1/4″ high. The rear sight is well above the hammer when the hammer is down, so it works just as well in the double-action mode as in single-action.

I realized when thinking about my early days with the Double Nine I shot it one-handed. My examples of how to handle a gun in those days were on-screen heroes such as Roy Rogers, Gene Autrey, The Lone Ranger, Hop-a-long Cassidy and the Cisco Kid and they all shot their six shooters one handed. It wasn’t until I started taking handgun instruction on the way to becoming an instructor myself that I ever knew any better. When I shot my Double nine for this article, I reverted to the one-handed shooting I’d done with it early on and was pleased with the results. I didn’t try to shoot any long-range targets but shooting at five to seven yards I could put all nine rounds in a 5″ circle consistently. I don’t know that I’ve ever had a misfire. I sometimes shoot shorts, sometimes longs and sometimes long rifles, just depending on what I have on hand when I go shooting.

The High Standard company was founded by Swedish immigrant Carl Gustav Swebilius who got his start in the gun business by working for Marlin as a machinist and later a gun designer. He also spent a little time at Winchester before starting High Standard Manufacturing to make parts for other gunmakers.  He borrowed some money from friends to by the assets of the Hartford Firearms company. Between selling Hartford pistols and improving upon them the High Standard became a manufacturing company. It’s interesting the moniker attached to the company was always High Standard, yet the firearms were always branded as Hi Standard. Hi Standard semi-automatics were sought after for competition and the revolvers found their place in the market as reasonably priced .22s suitable for teaching kids to shoot, keeping varmints away from the chickens and vegetable garden on the farm and just general fun shooting. The company operated several buildings in and around Harford, Connecticut and seemed at times to be doing quite well. They even supplied parts for US armed forces during WWII.

In 1968, the company was sold to an investment company called The Leisure Group. In 1978 the company was purchased by its managers but was soon in financial trouble and its assets were auctioned off. One of the primary parts distributors for the company bought some of the parts lines and the trademarks. In early 1993 a new company was formed in Texas to acquire the trademarks and .22 pistol line. The assets, including tooling, were moved to Houston in July of 1993 and the first of the Houston made guns shipped in March of 1994. The Texas company closed its doors in 2018.

Many collectors have realized the value of these firearms and prices have held steady. My particular model is listed in the Blue Book of Gun Values as being worth $450–$500. I’m glad to know I didn’t overpay for it and I’m pleased I’ll be able to pass it along to some lucky member of my family when I can no longer pull a trigger.