I became a .45 believer some years ago. It was a combination of things:  talking with some people who had been shot with various caliber handguns and studying the charts mostly. I figure I need all the help I can get. But my wife isn’t going to shoot a .45 and frankly she’d rather carry a revolver than a semi-automatic. She has a good 9mm semi-automatic and that’s her bedside gun, but when she’s out and about she wants a revolver.

The .38 Special is kind of anemic and the .357 Magnum is way too much for her to handle. So what does the job? When you get a chance, go back and look the comparison charts I did here in this blog in August 2015, you’ll see that an often misunderstood or overlooked revolver caliber ranks right up there with .357 Sig, .40 S&W and .45 ACP in what I look for in stopping power. That caliber is the .327 Federal Magnum. It’s a small cartridge, but because of the velocity with which it is flung from the .327 Magnum case, it packs a wallop! Especially if you choose Speer Gold Dot with 500 ft./lbs. of energy on target.

One of the reason’s I turned to the .327 Magnum when looking for a good self-defense revolver is that most of the guns built for that particular round hold six rounds of ammo, where the smaller .357s hold only five. Another cool thing about it is you can shoot .32 S&W Short, .32 S&W Long, .32 H&R Magnum, or .327 Federal Magnum cartridges. Some of these are pretty soft shooting for practice, whereas the H&R Magnum or the Federal Magnum cartridges are pretty serious self-defense rounds.

This is a comeback round and I’m really glad to see manufacturer’s taking it seriously. My wife’s gun is a Taurus .327 Magnum. It fits in her purse or in her center console quite handily. Speaking of center consoles, I just happen to have a Ruger SP101 in .327 Magnum in my Jeep console today, and pretty much every day

It’s a great shooting little revolver with sights I can see well and in perfect size for a console gun.

I recently added another .327 to the family collection, a Ruger Single Seven, which compliments the Single Nine .22 Magnum and Single Ten .22 already in the family. So if you’re looking for a self-defense revolver f 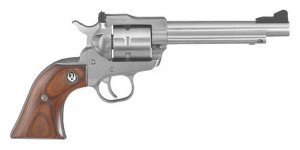 or either back up or as your primary handgun and don’t want the heavy recoil of a .357 Magnum or .44 Magnum, you might consider the .327 Federal Magnum.